Editor’s Note – We have been meaning to write an article on this topic for some time. A couple of things came to our attention recently. That prompted us to discuss this topic. We have taken every effort to describe the sources for comments below. We do realize that some of the “history” described below can shake deeply held religious beliefs even the discussion below is about history & the new light that is being shed on it.

A week or so ago, we came across remarks made in London in 2019 by Mark Regev, the then Ambassador of Israel to the UK. The short clip below is of his comments about the post-ancient relationship between the people of Israel & the people of India. Ambassador Regev begins with:

The specific reference of the Chapter & Verse of the Hebrew Bible was new to us. It confirmed some of the folklore we have heard for years about the Jewish people and India.

About 3-4 years ago, we heard the following from some one we know very well:

The comment by Ambassador Regev about Soloman is not that surprising because the British did discover references to what Muslims in today’s Indian subcontinent refer to as “Takht-i-Suleiman” or the Throne of Soloman at the top of a hill overlooking Srinagar, the capital of Kashmir. The site is “said to date back to 2500 BC” according to the British sources including Samuel Bourne who took the photo below in 1860s: 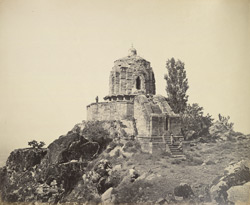 The temple shown above is called Shankar-Acharya temple after one of the greatest philosophical & theosophical (for want of a correct English term) scholars in Indian history. He traveled all across the Indian subcontinent teaching his views about Advaita or “Non-Duality” between the Divine Cosmos & humans. As the legend goes, when he entered the temple outskirts, the closed southern doors of the inner sanctum opened to welcome him (first time the Southern doors had opened in centuries prior).

From what folklore says, not only did King Soloman reside in the Kashmir area but that area was the abode of what are known today as Jewish people. The same folklore says that Moses did not receive the Ten Commandments at a hilltop in generally flat Middle East but at a mountain top in the Him-Alaya (Himalayan) mountain range.

That fits in with the ancient stories of great Saints, Rushis, & Theosophers (what a wrong term, but its the best we got in English) climbed up to Himalayan mountain tops to meditate & receive wisdom from the Divine. The concept is that Divine-gifted Serenity requires closeness to heaven & great distance from the multitudes on earth.

Now before we go to Arabs & Arabia, we need to take a small detour to Sindhav history & the resolution that dates back to 6700 BCE.

There is no doubt that Sindhu Dharma originated in the Sapta-Sindhav ( सप्त सिन्धव: ) region, the land of Seven Rivers that lies across parts of today’s Afghanistan, Na-Pakistan & Northwest India. Today Panch-Nad state (Punjab as Mughals re-named it) or land of 5 rivers is a part of the old Sapta-Sindhav region. All this is described in the truly ancient Rg-Ved (phonetically Rug-Ved), the oldest text extant. 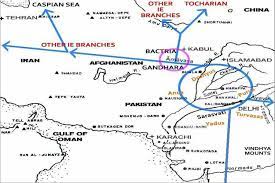 If you read the Vedic stories or the stories from the various post-ancient Puraan, you find conflict between two groups Sur & A-Sur. The Sur were the good guys, actually Dev (atmosphereic gods as distinct from the ultimate Divine Brahma) and the A-Sur were depicted as bad guys or Demons. Actually it seems fairly clear that A-Sur were Persians & in Avesta A-Hur (linked to A-Sur of Sanskrut) is a title of distinction or semi-divinity. Refer to Ahur-Mazda, the Creator Deity of the teachings of Zoraster.

Sometime in the early Aditi period, (that began in 6700 BCE), the two groups settled their differences (to be extremely polite) and Shankar was accepted by the Dev on par with Vishnu. Actually Shankar was welcomed with the title Mahaa-Dev or Mahesh (Maha-Ish) meaning the great God.

It is important to point out that Bhagvaan Shankar & Devi Paarvati (his wife, the daughter of the Mountain) are regarded as the Father & Mother of the Human species.

How is this linked to Ancient Arabs & even to Islam & Prophet Mohammed?

This week we came across an old article in the Times of India titled Ram footprints on Iraq’s cliff? Indian embassy tracks mural. Bhagvaan Shree Raam (Ram more colloquially) is worshipped and loved as an Ava-Taar of Bhagvaan Vishnu on earth. No story is told more often in India and the Indian Diaspora than his victory over the great but bad king Raavan of Lanka. To do battle, the army of Shree Ram had to construct a bridge between the Southern Tip of India and today’s Sri Lanka. Below is a short clip featuring NASA satellite images & geological analysis of the bridge they found.

The story of Shree Ram and his loyal commander Hanu-Maan is known all over the world. A part of that story was used by Brazil’s President Bolsonaro to thank India for shipment of Covid vaccines to Brazil.

Recently an expedition by an Indian team of archeologists discovered a mural on a cliff in Iraq circa 2500 BCE that seems to be a virtual replica of similar depictions of Shree Ram & Hanuman all over India. The “mural is etched into the Darband-i-Belula cliff, overlooking a narrow pass in Iraq’s Horen Shekhan area“, according to the article. 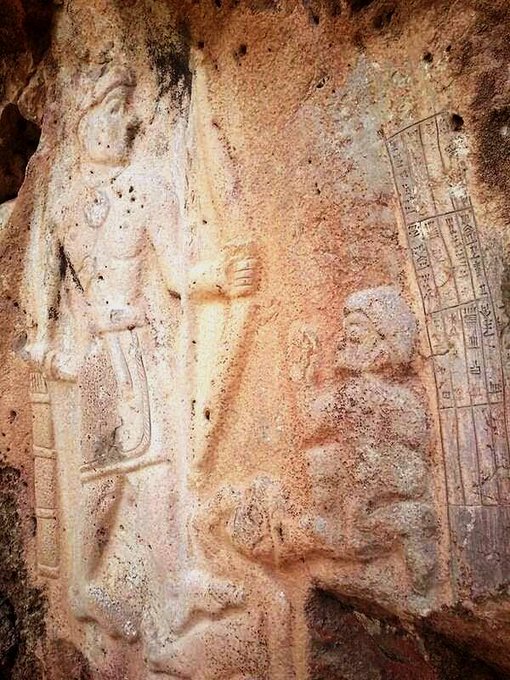 Look at the map of Sapta-Sindhav above. Consider how long one would have to walk from Sapta-Sindhav across Iran to get into Iraq. You wouldn’t do it just to paint a mural, right, especially 4,500 years ago? Does that suggest that the Sindhav people migrated to Arabia to establish their own culture in Arabia?

Now let us go back to 2015 when a Muslim religious scholar Mufti Muhammad Ilyas of
Jamiat Ulema shocked much of India by declaring that Bhagvaan Shankar was the first Paigambar of Islam (Prophet Mohammed being the last & final Paigambar). He further said that Bhagvaan Shankar & Paarvati were indeed the original Father & Mother of the Human Species.

So what does this have to do with “Arab” term or the people of Arabia? The first two minutes of his talk with an Indian anchor on Zee News explain it better.

The anchor refers to a text titled A History of Persia written by Lieut.Col P.M. Sykes in 1915 to describe the etymoloy of “Arab” term. The clip is in Hindi and so below is a synopsis of the first 2-3 minutes of the clip:

The Indian name for Friday is Skukra-Vaar. The term Skukra means Big & is translated in Arabic as “Jumah”. Coincidentally or otherwise, Shukra-Vaar (Friday) is termed in Arabic as Al Jumah and is a weekly holiday. And what was Friday called before Prophet Mohammed? “Arubah” meaning Arabism, Arabness according to Quora.com. A curious similarity to Arub or Arua, the grandson of Shukra-Acharya, isn’t it?

The clip above also features two Muslim religious scholars who reject the views expressed by Mufti Ilyas. Their arguments simply say that the Koran does not mention any of the above and so it is not true.

From this article’s point of view, the above is mainly lineage-driven or history-driven.The religious issue is not a part of our discussion just as it was not in discussion in Section 1 about the Jewish links to the Sapta-Sindhav.

But for completeness, we point out that Mufti Ilyas did create a storm in India with his views that Islam’s first Paigambar was Bhagvaan Shankar & that Muslims were originally Hindus of the Shankar path. Below are two clips that feature the heated religious discussion:

4. Characteristic Values of the Sapta-Sindhav

Allow us to quote the final comments of Ambassador Regev from the clip above:

So you would think that both people of the Middle East would be proud of any Sindhav heritage they might have, right?

No. Because those Sindhav people have now become Hindu, a serf-like people that remain mentally enslaved simultaneously to Iranian-Muslim culture-language and to British culture-language. Watch Bollywood films and see how much of the language is essentially Iranian-Muslim. Talk to the so-called modern urban “high society” types in India and notice how much of their language is British-servile.

Seriously folks – Ask every person of Indian origin you know to say even a single verse in Sanskrut, the eternal language of the Sapta-Sindhav and see how few can actually do so. That should tell you how pathetic these “Hindus” have become. Would any race be proud today of any “Hindu” heritage in them? We don’t think so.

Editor’s PS: Below is a map of the Sapta-Sindhu or seven rivers with Greek-Indian, Muslim, & Sindhu names. 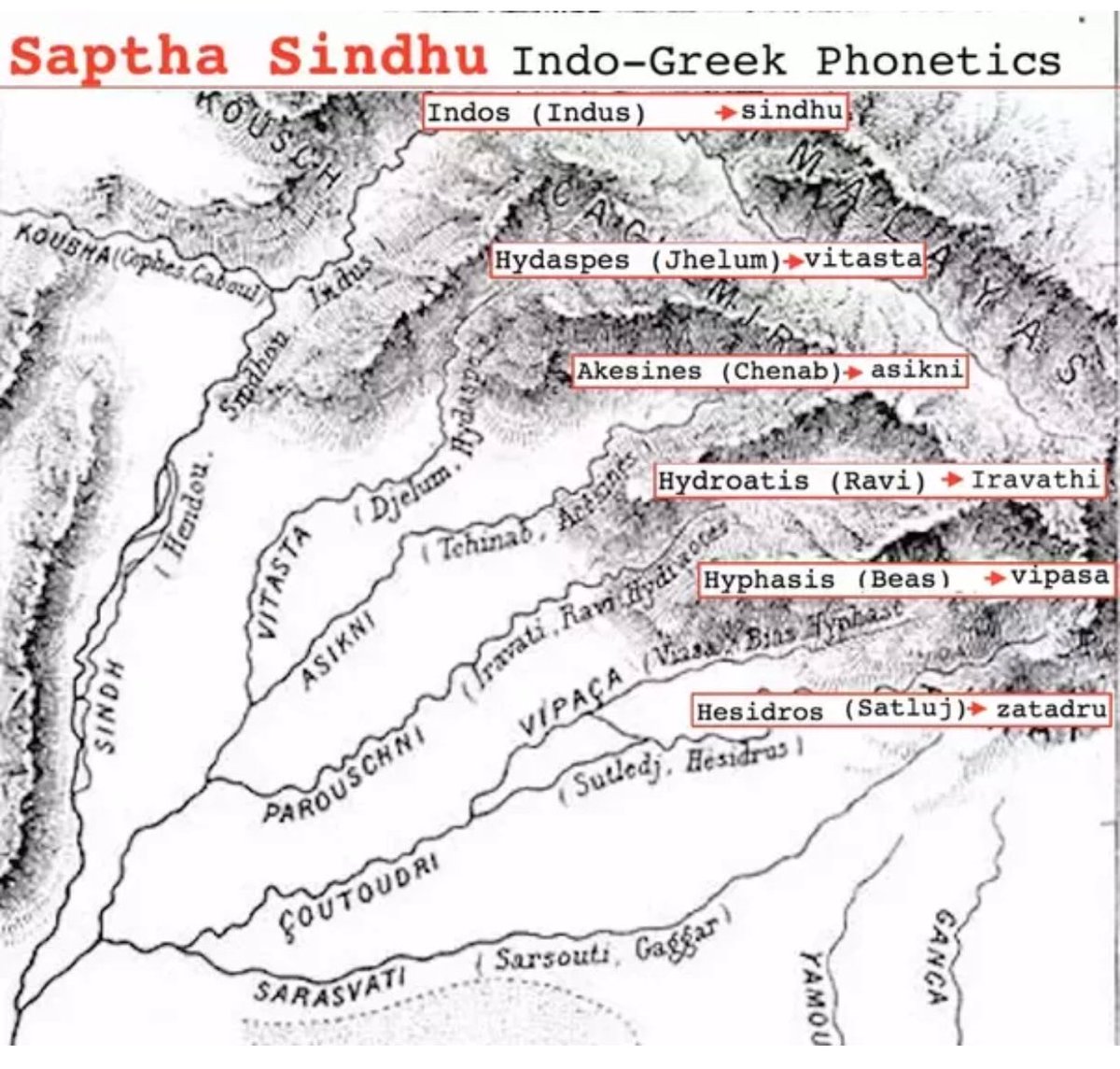