Think back a month & half to the Tuesday before Thanksgiving. The 30-year Treasury yield was at 2.04% without any panic even though it had rallied up about 12 basis on Tuesday & Monday. The Nasdaq 100 was sort of weak without any sense of turmoil. The next day, Wednesday November 23, the day before Thanksgiving, the “minutes” of the November FOMC meeting were released at 2 pm.

And hell broke loose. The 30-year yield went down hard on Wednesday afternoon and fell off the proverbial cliff on the Friday after Thanksgiving. Between 2 hours on Wednesday afternoon and on Friday after Thanksgiving, the 30-year yield fell by 19 bps. The following week featured testimony from Fed Chair Powell which, because of its hawkishness, pushed the yield 20 bps lower that week to close at 1.692% on Friday December 3.

Remember what a stunner that November Non Farm Payroll number was. That stabilized the Treasury market and the 30-year rallied in the next two weeks to close at 1.82% the day before the FOMC and Chair Powell’s presser. That presser was more restrained or less-hawkish than the minutes that were released 3 weeks prior. That restrained presser did a great job of stabilizing the Stock & Treasury markets and paving the way for the Santa Claus rally.

Focus now on how restrained Powell’s presser was on December 15 and remember that presser was only 30 minutes after the FOMC statement released that afternoon. In that presser, Chair Powell made no statement about letting the Fed’s balance sheet run off.

Now fast forward to this Wednesday, January 5, 2022. Why did all hell break loose that afternoon with stocks cascading down? Because the minutes of that December 15 FOMC meeting released on Wednesday January 5, 2022 contained a believable discussion of FOMC members discussing letting the Fed’s balance sheet runoff.

Now go back & recall that exactly the same thing happened in the Fed minutes released on Wednesday November 23. Those minutes delivered a stunning surprise, a whole new policy that had not been revealed by Chair Powell in his presser following the November FOMC meeting.

Frankly, we have suspected for some time that the so-called “minutes” of the previous FOMC minutes are not really honest minutes but a vehicle to provide details of the updated views of FOMC members in the two-three weeks following the FOMC minutes. It would so much more honest of the Fed to label these releases as “updates” instead of “minutes”. That might alert investors & analysts to potential major changes & prevent unnecessary trauma in markets.

Going back to our November analogy, it seems that Powell pressers on FOMC day are intended to show Jekyll-FOMC to keep markets composed and the wrongly-termed “minutes” released 2-3 weeks later are intended to scare investors with a Hyde-FOMC image. Presumably this is intended to reveal to the FOMC how the markets would react to the policies they might be considering. This might be useful to the Fed but it seems highly dishonest to us.

Which asset class behaved the same after the release of the two sets of Fed “minutes” discussed above?

The steep sell off in the week and half from Thanksgiving to Friday December 3 was driven by fear of the Fed doing damage to the economy by becoming unduly hawkish. That fear, in our opinion, subsided from December 3 onwards because of the strength of the NFP report that day. The Santa Claus rally & the rally in 30-yr yield positively changed the outlook of investors towards the U.S. economy, we think.

To be frank, the two sets of reactions in the 30-year yield could also have been due to market positioning. The shorts in the 30-year were humongous before the Thanksgiving week and so the scare of the Fed making a mistake led to massive short-covering from Thanksgiving into Friday, December 3. These shorts were presumably re-established during the December 3 to January 4 period as the 30-year yield rose from 1.69% to 2.06%. Given this huge move in 30-year & the large short position in 30-year, the hawkish surprise on January 5 didn’t have a big impact on the 30-year.

The big difference in Treasuries reaction from the two sets of minutes was in the 2-year yield. It rose by 6 bps on Wednesday and by 5 bps on Thursday. So the 30-2 spread actually flattened a bit after the release of the “minutes”.

Note Chairman Powell appears before the Senate committee next week. Does he feel the pressure to exhibit a robust hawkishness or can he be both firm and not too hawkish in these comments?  Then we get the CPI & PPI after his testimony. How the Treasury markets react to all that should be revealing.

Remember the next FOMC meeting & Powell presser is on Wednesday, January 26, 2022. Is it possible that the markets keep acting bad in the next couple of weeks to force Powell to speak dovish? Or will we get a stabilization or even a soft rally before the FOMC to persuade Powell to reveal all his inner hawkishness.

Finally the turbulent action of this week might be due to the pressure on large speculators to get positioned the way they want. How else can one explain this week’s 10% rally in Bank of America and a 15% rally in OIH?

Remember our old (early 2021) valuation measure we termed MC/FB – ratio of Market Cap to size of Fed’s balance sheet. What would happen to this measure of value when the Fed starts running off its balance sheet, meaning when the size of the Fed’s balance sheet gets smaller every month? The Market Cap of Stocks would get more & more overvalued. Is that really why the QQQ fell off a cliff last week?

How does 3.9% unemployment interface with inflation? 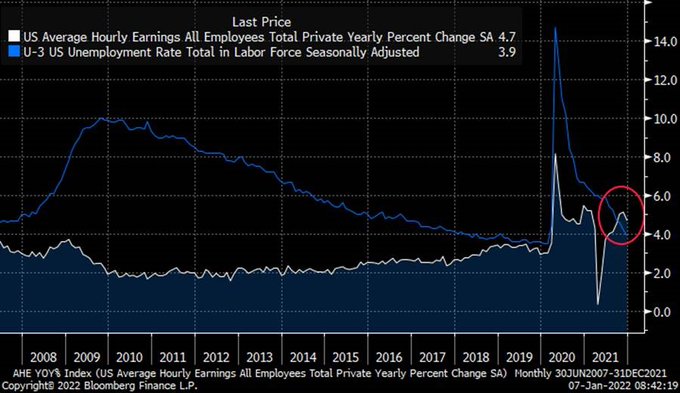 On the other hand, ECRI is on the side of a cyclical slowdown: 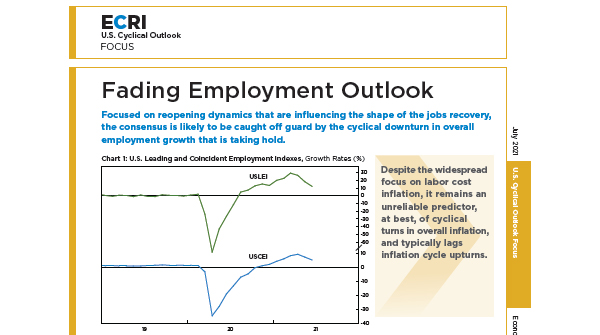 For those who consider ISM to be a leading indicator, 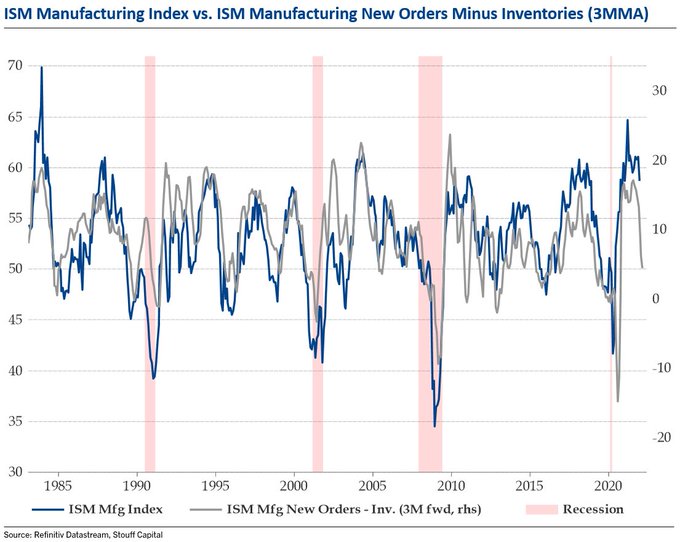 So is it possible the recent rate upsurge meets a slowing U.S. economy sometime in late Q1 or early Q2? How will the Treasury market react to that, especially if shorts in Treasuries have been built up to the nth-degree?

What equity trade is the cousin of the Short Treasuries trade? And how intense has that been? 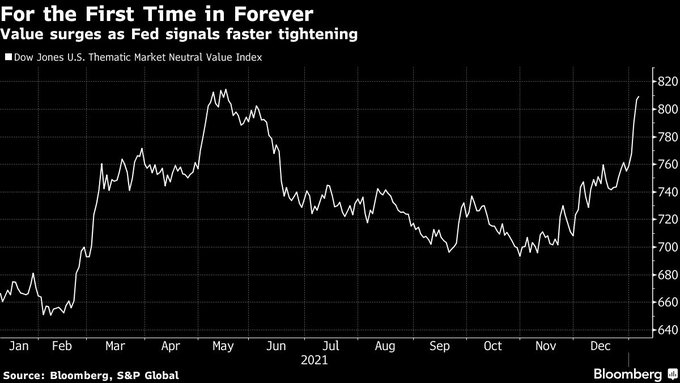 How did one prominent name react to this (courtesy of a J.C.Parets retweet)?

Everyone knows that Nasdaq stocks have cratered. But might this sell-off go further before it stops? One view is from Sentimentrader.com:

Holy carnage! Does the Nasdaq have to fall by 47%? On the other hand, some expensive sectors might have fallen enough, according to Morgan Stanley via The Market Ear: 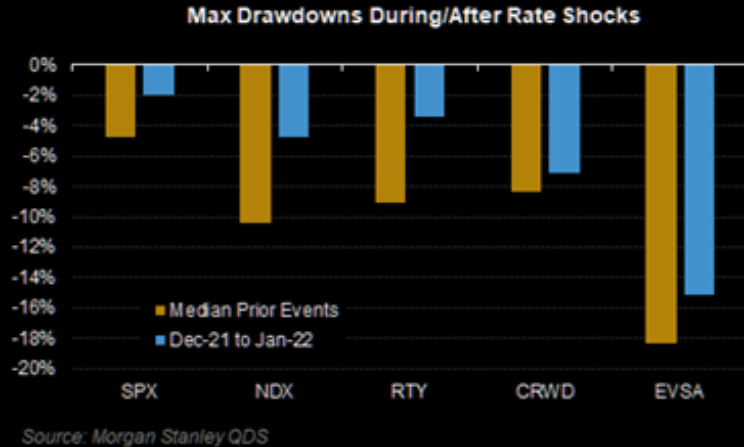 Is there another area within technology that might beat the NDX? Semiconductors, said CNBC’s Carter Worth on Friday:

The chips are crumbling. @CarterBWorth breaks down a terrible week for the semiconductors and what could come next $SMH $SOX $SOXX pic.twitter.com/EUhk7CEsuE

Forgetting all the above mumbo-jumbo, a simple question is what do cycles say? Fortunately, Jim Cramer gave us a glimpse into the views of the legendary Larry Williams in a short clip on his Mad Money show:

What about the intermediate term? Williams thinks, via Cramer, that there will be “a selloff in June-July, then a rally followed by a correction in September & then a big rally into year-end …”. Watch the abridged clip yourselves:

Is there a strong sector that could continue its rally for the next 30 days?

Indian ETFs did very well even on a weekly basis with MSCI-INDA up 3.2%, Nifty-INDY up 3.5% & WisdomTree EPI up 3.5%. And Rosie wrote positively about Indian market for 2022: 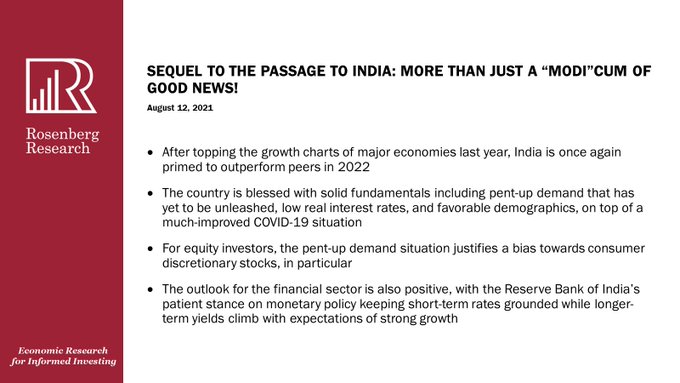 Remember the story we relayed a few weeks ago of Katrina Kaif, the British born-bred woman who became the item superstar of Bollywood. We hear reports that Amazon paid Katrina 800 million rupees (about 12.5 million USD) for rights to videos of her recent wedding. This is a tribute to the crazy spending appetite of that film-crazy society. Man, do they spend!!!  Unfortunately we were never beneficiaries of such spending because we were born into the wrong gender & were nerds on top of that.

At the same time, the Taleban detained 7 members of the NaPakistani forces for violating the borders of Afghanistan. It seems the Durand Line of 1893 is rapidly becoming an issue between the Taleban & their previous benefactor-handlers, the NaPaki military. How serious might this become? The ultra-extremist Haqqani Network that was closest to NaPak Military is now publicly siding with Afghani Taleban against NaPak. And this was the network that was protected by the Napak military from U.S. military counter-terrorist operations.

If this is not enough, the new news is that the Taleban have now reconstructed their suicide battalion & deployed it in Badakshan, the province that borders China & Tajikistan. Mullah Nisar Ahmad Ahmadi, Deputy Governor of Badakshan said of this battalion:

Now this battalion is deployed near the China-Tajikistan border of Afghanistan. This seems to support our very long-held view that the Taleban are Afghan-nationalists and, while they were happy to get NaPaki help & sanctuaries, they would turn against NaPaki & Chinese attempts to enter Talebani Afghanistan.

Think back to Vietnam. China helped Vietnam fight against US forces but when the US forces left Vietnam, China & Vietnam became adversaries within a couple of years. It is even worse between Pashtuns of Afghanistan and Panjabi NaPakistan. For its part, Russia would prefer that the Taleban direct their forces against Afghani borders with China & NaPakistan instead of Central Asia. The centuries old game might be beginning anew.